On Thursday the 5th of June at the Bord Gais Energy Theatre, social media experts and marketing folk from across the country gathered for the award show to beat all others, The Social Media Awards or more lovingly known by their hashtag the #Sockies!

The Social Media Awards were first launched in 2011 to recognise companies for their innovative and business-focused use of social media. Last year 450 people attended the event, however, this year that number increased to over 500. The awards are the brainchild of Damien Mulley one of Ireland’s foremost experts on Social Media and Rick O’Shea, 2FM  DJ and social media aficionado! 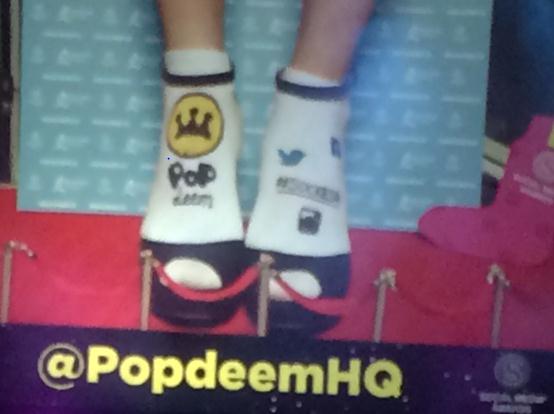 Upon entering the Bord Gais Energy Theatre, anyone wearing socks was asked to participate in the ‘Sock Walk’ which had an overall winner for the best socks.

Once through the sock walk, guests were presented with ‘Fish n Chips’ style food which seems to be a change from previous years. Maybe they wanted it to be more of a social event?!

The awards ceremony was hosted by RTE 2FM DJ, Rick O’Shea, who most definitely brought the fun factor to the night. Throughout the night sweets, crisps and chocolate were thrown into the crowd to keep them on their toes, literally! He engaged with everyone in the theatre, moving around and making sure everyone got something! He brought an element of ‘Panto’ to the night, adding to the fun atmosphere.

Our View of the Awards Ceremony

The FCR Media Team gained a great insight into how some of Ireland’s biggest brands use social media to run creative and engaging campaigns to get their message across to their customers.

Centra, winning 3 awards and the Grand Prix award, really showed us the impact social media campaigns can have on businesses, and what can be achieved if you invest time and effort into your campaign.

It certainly gave us determination and drive to be on the stage next year collecting awards for FCR Media and our clients!

Congratulations to this years winners of the 2014 #Sockies!

And the winners of the 2014 Social Media Awards / Sockies are:

Best Blog of an SME sponsored by .Me Registry
Brave Media

Use of Social Media by an SME
Tour America

Use of Social Media by State Body
Defence Forces

Best use of SM for a sponsorship campaign
Electric Ireland

Innovative Use of Social Media
Spin 1038 The Drop

Agency of the Year
Radical